Along the silky lane 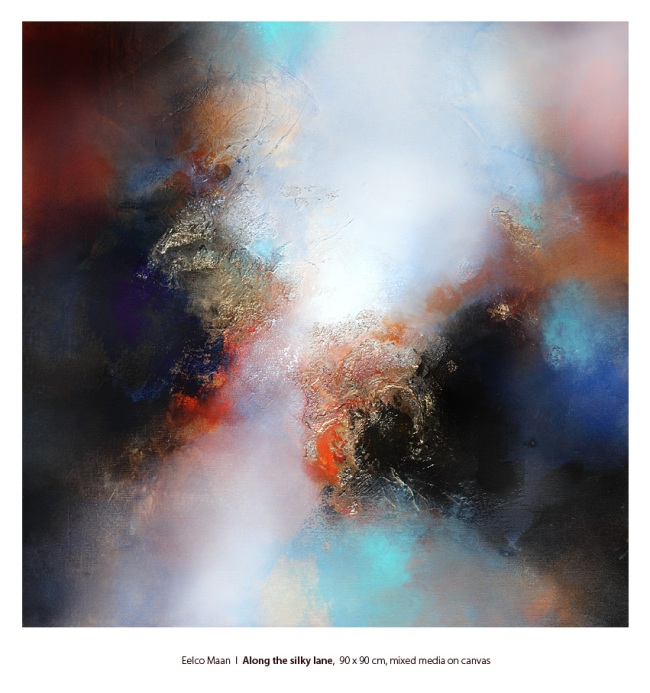 Sold to a private collector in Rotterdam

This one I painted in the week between I learned one of my best friends had died, and the day we buried him. He got in a car-crash in India in january 2012, got into a coma and never came out of it.

Even during the week that the bad news sank in, it never occurred to me to create a painting having a connection to his death. I don’t work that way. When I paint there are no thoughts, concepts or emotions.

I am body, hands and eyes, it’s very physical, aiming to create something that is at the same time beautiful and meaningful. I’m looking for harmony between composition and color and in that way hope to seduce the spectator to take a closer look and make some sort of connection. We all are not so different after all.

Only after I had finished the painting, I felt some sort of connection with his passing away.

Yet, I don’t believe the painting is about death, though, or even particularly about him or his death. It is about transition, a new beginning, about love, drive, passion, bliss, the mystery of life and death and light…, always the light. Hans was a person who I considered to be a light in my life, a true friend.

The title I derived from a song we wrote together when we about 16 years old. We had just started our first rock ’n roll band; we wanted to become popstars, like the Beatles, the Eagles and the Stones… the high hopes of shy adolescents embarking on life. Yet it sounds like an epitaph:

“You came to me on a summer’s day,

We travelled until we met a cloud,

you’ll find me there, without any doubt…

I had to wait for a gate so white,

Along a silky lane I went, all in timeless Heaven’s land…”

Hans, as the drummer, made rhythm and wrote lyrics, I played guitar and made melody…

In the end life’s strange twists and turns made up for a different future: Hans became a manager at Unilever, I became a visual artist.

Life can be hard sometimes. A month after burying my best friend I had to let go of Lisa, one my dearest dogs.

We buried her under the apple tree in the back of our garden. I am sad of course, but I find great relish in the fact that I have been so privileged to know both of them. They have enriched my life to the fullest and I will never forget them.

A citation of Plato comes to mind, considering all these recent past events: “Be kind, for everyone you meet is fighting a hard battle”…